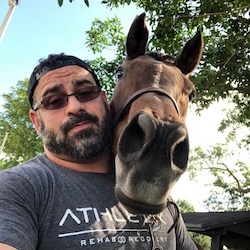 David was born and raised in Brazil and since his childhood had always being fascinated with horses. In 1997, he received his veterinary degree from the University of Marilia – UNIMAR. He has extensive equine experience and has had many international internships focusing on medicine, myofascial release, and holistic medicine for sport horses. Subsequent to graduation he worked in private practice before joining the McPhail laboratory in the summer of 1999. David completed his master’s degree at the McPhail Equine Performance Center in the summer of 2001 and a MBA from Michigan State University. David works as a hospital administrator for Knowles Animal Clinics since 2013. David is also an accomplished powerlifter athlete holding two world records in deadlift.