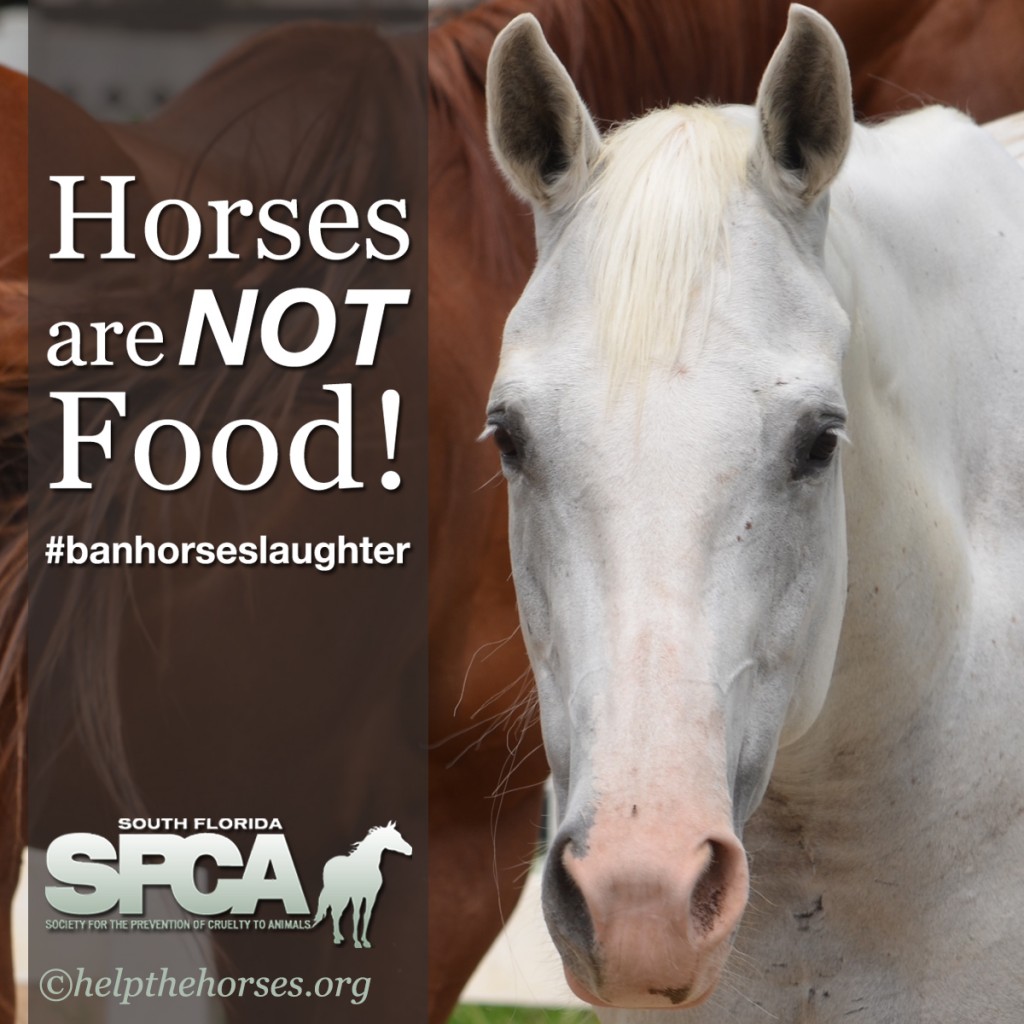 Inhumane Slaughter – No Better in Regulated U.S. Plants
Horse slaughter is not a form of euthanasia. It is inherently brutalizing to horses. Their skittish nature makes them extremely difficult to stun, using the preferred Captive Bolt method, which was never designed for use on horses. They often endure repeated blows to the head and sometimes are alive and kicking when hoisted up by a back leg to have their throat cut and during dismemberment.

Prior to the closure of U.S. horse slaughterhouses in 2007, USDA inspectors documented rampant cruelty violations in those plants – horses denied water, whipped in the face, and hit with electric prods. Many incidents of heavily pregnant mares giving birth to foals on the killing floor have been documented.

Even at a time of intense public controversy and scrutiny of this industry, government documents and undercover footage demonstrate that cruelty was rampant in USDA-inspected slaughter plants, despite hollow assurances from pro­slaughter organizations. USDA inspection documents and photos, obtained through a Freedom of Information Act request (FOIA Request 06-108) to the USDA, show horses with broken bones protruding from their bodies, eyeballs hanging by a thread of skin, and open wounds.

Slaughter is Not a Necessary Equine Management Solution
Sensible, thoughtful and vastly more humane solutions are readily available to manage equine populations. The solution lies in responsible breeding and ownership practices. These practices can be supplemented by the hundreds of equine rescue programs that re-home, retrain, and rehabilitate horses in need of homes. The overwhelming majority of horses slaughtered each year are healthy and in good condition — 92 percent, according to the USDA. These horses easily could have led full, productive lives in good homes had they not fallen victim at auction to kill buyers who outbid horse owners. To those who say the horse population in the U.S. will get out of hand, the numbers speak for themselves. The annual number of horses sent to slaughter was as high as 450,000 in the 1990s and as low as 42,000 five years ago with no resulting oversupply of horses.

Horsemeat is Not Safe to Consume
Horsemeat is dangerous to those who consume it. Because American horses are not raised for food, they are routinely administered numerous drugs, including phenylbutazone (bute, aka horse aspirin). The claim that the levels are too low to be dangerous have no basis in fact. Furthermore, bute is a known carcinogen with serious, long-term health effects. These drugs are so toxic to humans that the FDA bans their use for food animals.

Funding horse slaughter inspections would most certainly divert precious resources away from the inspection of food products that Americans actually consume in favor of establishing a toxic product that has no domestic appeal. The idea of slaughtering companion animals is unacceptable to the American people and will never be embraced. A 2012 national poll found that 80% of Americans support a ban on horse slaughter for human consumption.

The Ultimate Answer
The answer is not, and never will be, to return to subjecting our horses to abuse and unacceptable conditions at plants in the U.S. The answer is to ban horse slaughter and the export of horses for slaughter altogether and to provide our horses with a decent life and, when necessary, a decent death.

From the Kill Pen from SYNERGETIC on Vimeo.

To make a one time or recurring tax-deductible donation online, please click on your choice below.

South Florida Society for the Prevention of Cruelty to Animals is a private, non-profit 501(c)(3) organization located in Miami-Dade, Florida. Founded in 1992, it is dedicated to the rescue, rehabilitation and adoption of abused, neglected and abandoned horses and other livestock. The organization also educates the community about responsible equine care and ownership, and promotes the welfare of horses through local and national advocacy. South Florida SPCA works in partnership with local law enforcement, and receives partial funding from Miami-Dade Animal Services (MDAS). SFSPCA’s CFC (Combined Federal Campaign) number is: South Florida SPCA Society For The Prevention of Cruelty to Animals – 13214.